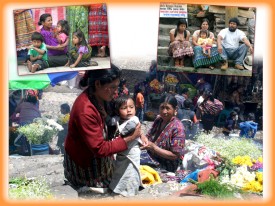 Our vision, our dream, is to build a future of justice and prosperity in Guatemala and in other Countries of the South of the world.

We strive to affirm the right to a social justice allowing all the people of the South of the world to finally become protagonists of the construction of their future.

Our mission: we aim to change the unbalances in the relationships of power that are at the base of the poverty in Guatemala by strengthening the awareness and the knowledges of the individuals, improving their conditions of life , supporting their organizations, contributing to modify normal procedures and unfair politics.

WE, at the association Hermana Tierra Onlus,share the thought that poverty is not a natural condition, neither a personal failure but the consequence of the negation and violation of the fundamental human rights, perpetrated by the strong ones over the weak ones.

AT THE BASE OF THIS APPROACH WE CAN FIND: 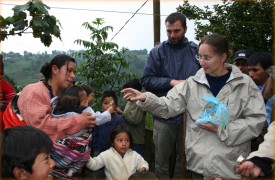 – the development of a critical conscience through the analysis of ITS own context, of the existing relationships of power and of the violations in action that allows people to understand the causes of the poverty to directly act on them;

– the satisfaction of the immediate necessities only as a way to put people in the condition to claim his/her own rights and not as a goal in itself;

– the full involvement of the communities in the definition of their own demands and in the formulation of possible answers;

– the analysis of the relationships of power and the strengthening of the power of the poor people and excluded;

– the strengthening of the democracy through the creation of occasions of comparison with the institutions in which the citizens feel themselves valorized and listened;

– the call of the State to its own responsibilities concerning the respect,the promotion, the protection and the realization of the rights of its own citizens.

The association Hermana Tierra has assumed as founding values, as well as standard of behavior of all the associates and collaborators in the realization of the mission and in the management of the activities of its own way to act ,the following inspiring principles:

EQUALITY: We seek inspiration in the universal principles of brotherhood and human solidarity and an egalitarian vision of the world, operating with impartiality for the promotion of the rights of people without any racial, religious, cultural, sexual or political distinction. We refuse every form of discrimination in any type of internal and external relationship.

PARTICIPATION AND COOPERATION: We seek the dialogue with local communities, so that to operate starting from the needs and the aspirations by them expressed, in the respect of their culture and stimulating them to take a leading role. We believe in the development and in promoting good human and social relationships inside and outside the association, valorizing the interests of the associates, sharing ideas and problems to meet the needs of the collectivity we serve.

INDEPENDENCE: We act in independence and autonomy, always remembering the Christian nature every associate and volunteer has in common; nature that is inspired to the evangelical principles of brotherhood and solidarity, refusing every form of discrimination. We consider the difference a value.

TRANSPARENCY: We manage and we communicate all our initiatives in the correctness, in the completeness and transparency of the information and in the respect of the truth. Transparency in the decisional making, in the use of the resources, in the communications, in the mechanisms to realize and eventually to correct them. Transparency that doesn’t mean only to make the information available, but also to let those who receive it, able to understand and use it. We solicit the donations giving maximum evidence to the purpose of the fund raising and the reached results.

EFFICIENCY: We guarantee on the use of the means and the economic resources according to the maximum correctness and optimization of the same ,in operation of the institutional objectives.

ENHANCEMENT OF THE INDIVIDUAL: We always try to enhance the individual and to support the development of the local resources, by approaching in a positive way to the reality and helping every single to take conscience of his/her own value.

On this value we base the internal relationships in the association (with partners and employees) and the external relationships with the local partners, the recipients of our projects and the supporters who back our initiatives. The difference is in the principles that these processes direct and that we daily put in practice, as organization but also and above all as people as a part of it.